Sometimes You Gotta Get Away

"Vince Hatfield's "Sometimes You Gotta Get Away" is as easy on the ears as the
easy life story line in the song. Vince has likely recorded his best sing yet.
Mike Carlin The Country Gold Network

"Sometimes You Gotta Get Away"  by Vince Hatfield is a very good song.
It is by far the best thing I've heard from him yet."
Kip Jervis-WEZJ  Williamsburg, KY

"Vince has had some really fine releases through the years but
"Sometimes You Gotta Get Away" is by far his best ever."
Mike Betten/KLMJ Radio - Hampton, IA

Blue Moon Records is pleased to announce the release of Vince Hatfield’s latest single, “Sometimes You Gotta Get Away.” Recorded by Vince at Sound Emporium (Nashville, Tenn), the song was written by hit-makers Wynn Varble (“Have You Forgotten,” “Waitin’ On a Woman,” “I’m A Little More Country”) and Don Poythress (“I’m A Little More Country,” “Things That Never Cross a Man’s 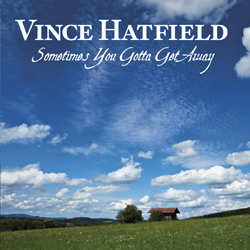 Hatfield’s traditional country ode encourages rest and relaxation and taking a break from life’s hectic pace. An easy and enjoyable listen, the smooth instrumentation relies heavily on fiddle and guitar to bring it to life. The recording of this new single features a stellar line-up of musicians and includes such legends and greats as Charlie McCoy (acoustic guitar), Brent Mason (electric guitar), Mike Chapman (bass), Jimmy Capps (acoustic guitar), Michael Spriggs (acoustic guitar), Eddie Bayers (drums), Rob Hajacos (fiddle), Steve Nathan (piano), and Gary Prim (electric piano, strings), plus an all-star cast on harmonies with the famous Jim Glaser, John Wesley Ryles, and Wes Hightower also on background and harmony vocals.
“I can say that everyone that has heard ‘Sometimes You Gotta Get Away,’ including the ‘A-Team’ who played on it, said that it is one of those few and far between ‘great’ songs,” said Hatfield. “I was working at my ranch trying to choose one more song for the upcoming session when I heard it playing in my pick-up from a distance. I immediately called Eric and said, ‘This sounds like a hit, please call that publisher and put it on hold.’ We got lucky, I really was afraid some other artist might have already put this great song on hold.”
Eric Paul, a long-time friend and collaborator of Hatfield’s, was excited to produce “Sometimes You Gotta Get Away.” Paul’s lengthy career as as engineer and producer includes working with such legendary artists as Willie Nelson, Billie Joe Shaver, Waylon Jennings, Kris Kristofferson, Kenny Rogers, Eddy Raven, Elton John and more.
“‘Sometimes You Gotta Get Away’ is one of those songs that most people can relate to," commented Paul. "The song has the right combination of classic and modern country. Vince really delivers this. I love it!"